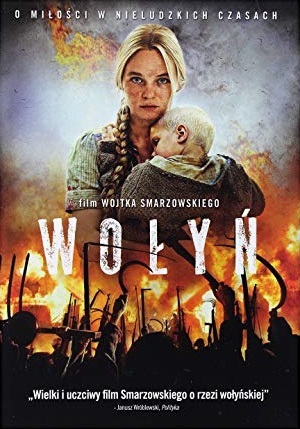 The borderland people were killed twice. First with an axe, then with silence. And the second death was worse.
—Opening quote

A 2016 Polish epic war drama written and directed by Wojciech Smarzowski, Volhynia is the first theatrical release describing the events leading up to and the Volhynian Slaughter of 1943 itself. note There were several movies about the Polish Army's fights with the UPA in the late 1940s, most notably Fire Master Kaleń. The screenplay was based both on historical events and a collection of short stories by Stanisław Srokowski titled Hatred.

The movie's central protagonist is a young Polish woman, Zosia Głowacka (Michalina Łabacz in her first onscreen appearance). Volhynia begins in 1939 during the wedding ceremony of Zosia's sister with a local Ukrainian, Vasyl. Zosia is also in love with a young Ukrainian, Petro; but her father marries her off to a wealthy landowner Maciej. The movie then switches to 1941 and finally to 1943, culminating with the infamous Volhynian Bloody Sunday (11 July 1943) and subsequent massacres.

Due to its graphic content, Volhynia gets a hard R-rating. The movie received significant critical acclaim in Poland and Germany, while being banned in Ukraine (the Ukrainian actors who appeared in Volhynia were financially and socially punished). It was also a major commercial hit, with more than 1,400,000 tickets sold during its theatrical run. It was confirmed the movie will receive at least limited theatrical run in the US.