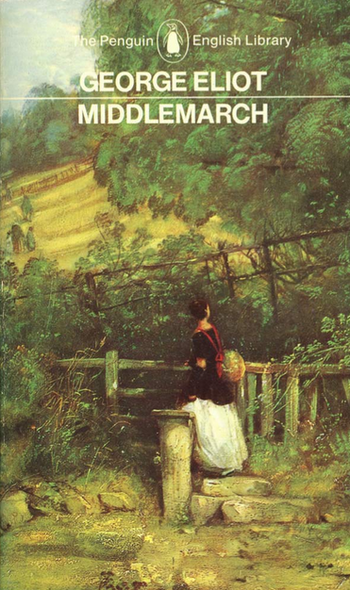 Who shall tell what may be the effect of writing? If it happens to be cut in stone, though it lie face downmost for ages on a forsaken beach, or 'rest quietly under the drums and tramplings of many conquests', it may end by letting us into the secret of usurpations and other scandals gossiped about long centuries ago: — this world being apparently a huge whispering-gallery.
Advertisement:

Middlemarch : A Study of Provincial Life is a novel by George Eliot, first published in instalments from 1871 to 1872 and often considered to be her masterpiece.

The novel centres around several groups of characters in the provincial town of Middlemarch and its surrounding villages, between the years 1829 and 1832. This was a time of political change in England, during which Parliamentary reform was proposed to increase the number of eligible voters and to remove "rotten boroughs" - constituencies in which a Member of Parliament could be returned by only one or two voters. The differing political and religious views of some characters form part of the background of the novel. Mr. Brooke, for example, stands for reforms that are unpopular with other members of the town's gentry.

Dorothea Brooke, an intelligent, idealistic young woman marries Mr. Casaubon, a much older man whose life's work on a Key to all Mythologies she thinks will provide a fulfilling role for her. She looks forward to helping Casaubon in his great project, and imagines that it will open a new understanding of culture, art, language and life. Meanwhile, Will Ladislaw, Casaubon's orphaned cousin from a disgraced branch of the family, is searching for direction and a way to gain a useful living away from Casaubon's patronage.

Fred Vincy is the son of a successful Middlemarch manufacturer. His prospects in life are bright, but rely on an expected inheritance from Mr. Featherstone, a rich uncle by marriage. While waiting for this, he's happy to live on his expectations and try to maintain the life of an educated gentleman-at-leisure, while dreaming of a future with his childhood sweetheart, Mary Garth.

Rosamond Vincy is Fred's sister, who finds herself attracted to the good prospects and glamorous background of Lydgate, the town's new doctor. Lydgate himself has thoroughly modern ideas and looks forward to replacing the town's old-fashioned medical practices, while carrying out research at the new fever hospital to which he is appointed.

Other characters include the wealthy and seemingly respectable banker, Bulstrode, who sponsors Lydgate and deals with the financial affairs of the Vincys, and Mr. Farebrother, a clergyman who is in the running for the chaplaincy at the new hospital.

Over the course of the novel, Eliot deals with the way in which these various plans and dreams play out, and how circumstance, and the expectations and scruples of an often small-minded society can interfere with happiness and change.

Eliot also seems to have been quite conscious of the tropes she was playing with; her essay "Silly Novels by Lady Novelists" sets out many of the 19th century literary tropes subverted in the Dorothea story arc. In brief, Eliot didn't think much of novels written by women in which the protagonist, generally both a Mary Sue and The Pollyanna , would go around bettering the lives of the wretched, showing how smart she was and then making a good marriage. This should sound familiar to readers of the novel.

Two television adaptations have been made, in 1968 and in 1994. No film has yet been made, although Sam Mendes was once reported to have been producing one.