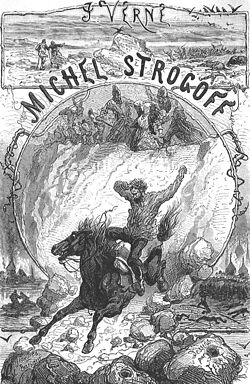 "You made a good choice there, General," said the Czar.
"I think so, sire," replied General Kissoff; "and your majesty may be sure that Michael Strogoff will do all that a man can do."
"He is indeed a man," said the Czar.
—Chapter 2, Partie I

Michael Strogoff: The Courier of the Czar (Michel Strogoff: Le Courrier du Tsar in French) is a book written by Jules Verne and published in 1876.

The Tartars have risen in rebellion in far-East Russia and cut the telegraph lines; they are helped by Russian traitor Ivan Ogareff, who plans to take Irkutsk and kill the royal family in revenge. Without the telegraph the Tsar Alexander II has no other means to alert his brother the Great-Duke in Irkutsk, so he sends Michael Strogoff, a 30-year-old Siberian courier from Omsk. Michael Strogoff will have to travel for five weeks to Siberia, under a false identity, to bring a secret message to the Great-Duke, warning him of Ivan Ogareff's treason.

En route, he meets Nadia Fedor, who is travelling east to join her father in political exile in Siberia, Harry Blount, reporter for the Daily Telegraph, and Alcide Jolivet, reporting for his "cousin Madeleine". His travels bring him close to his mother Marfa, but he's not allowed to even recognize her - nothing can detract him from his secret mission.

He meets also Ogareff in a coaching inn; the traitor doesn't recognize him, but steals his horse and threatens to hit him with a knut

. Strogoff refuses a fight because it would slow him down. But he will later have an occasion to give Ivan Ogareff A Taste of the Lash, fully aware of the consequences, which will be terrible...

You can read this book here

The novel was adapted for the stage by Jules Verne himself in 1880. Since then there have been a number of film versions, starting with an American (1914) and a Franco-German (1926) silent version. The 1935 Franco-German co-production Der Kurier des Zaren/Michel Strogoff starred the Austrian actor Adolf Wohlbrück, who soon afterwards emigrated to England and reprised the role of Michael Strogoff in The Soldier and the Lady (1936) under his new name Anton Walbrook. Other film productions starred Curd Jürgens (1956 and 1961), John Philip Law (1971), and Hardy Krüger jr. (1999). A Franco-German-Austrian TV adaptation starring Raimund Harmstorf was produced in 1975.