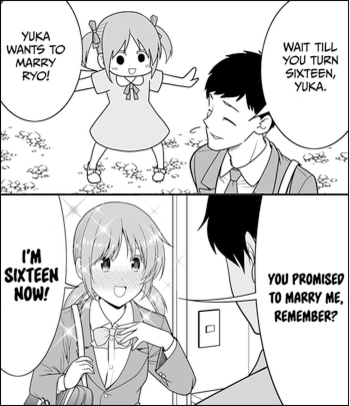 Values Dissonance aside...
Kagura: When we were kids, you promised we would get married.
Kyo: That's because you threatened my life!
— Fruits Basket
Advertisement:

A common staple of stories featuring Childhood Friends is the Childhood Marriage Promise. Years ago, when two of the main characters were small children, they promised to marry each other when they grew up. Now they're in High School or college, and She Is All Grown Up. Sometimes, the couple fall in love for real and they finally fulfill that promise. Other times, one of them is the Unlucky Childhood Friend whose heart gets broken.

A slight variation, one that usually comes up in Fantasy or Sci-Fi anime, is where the boy promises to always protect the girl (which, in the traditional sense of marriage, is pretty much the same thing). See Bodyguard Crush. See also Declaration of Protection, which can be read both ways. Often arises in a Forgotten First Meeting scenario.

The Childhood Marriage Promise is often made in the shadow of The World Tree.

Compare Puppy Love, which may lead to this. When it's the parents who make such an agreement, you have the decidedly-less-heartwarming Arranged Marriage. When two adults make such a deferred arrangement in order to avoid being single in old age, it's a Fallback Marriage Pact.

At the time, neither one really understood the implications of that vow. Between the Titans of Myth and Dark Angel, the two parted. Roy ended up the Unlucky Childhood Friend when Terry Long came into the picture, and had a wonderful train-wreck of a relationship with Cheshire. Almost twenty years, an acrimonious divorce (hers)

, a couple of murder attempts by his ex

, a naked trip into hell

, and a return from the dead for both later...They finally get there