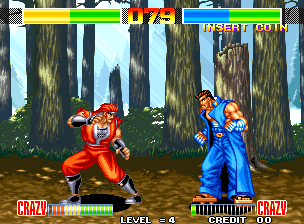 Hey, you don't look like Hanzou. Who are you?
Developed for the Neo Geo by ADK, Aggressors of Dark Kombat (often abbreviated as AODK) is a 1994 fighting game set in a semi-isometric view, resembling a Beat 'em Up, allowing players to move in eight directions as well as picking up weapons and using them. The game offers 8 playable characters, with one of them being Kotaro Fuuma from another ADK series, World Heroes. The game's three button control scheme of punch, kick and jump is also reminiscent of beat em ups.

The game only appeared on arcades, as well as the Neo-Geo AES and Neo-Geo CD. But many years after SNK Playmore bought ADK properties after its bankruptcy in 2003, this game came back to the consoles as part of the 5-game compilation ADK Tamashii for PlayStation 2 in 2008 and later on Play Station Network in 2015. Characters from the game have also appeared in various SNK games after they bought ADK, especially Kisarah Westfield in NeoGeo Battle Coliseum and in the Days of Memories series.