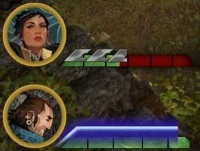 A character has multiple Life Meters. You might have to deplete all or just one of them to defeat them.

Variants that have their own trope page:

Commonly seen on a Marathon Boss. Often, each bar's depletion triggers a change in the boss' behavior as well, which leads to Sequential Boss or Turns Red. Contrast Shared Life-Meter.