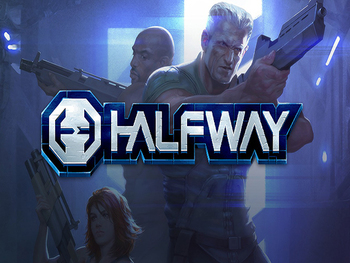 Halfway is a Turn-Based Tactics game, which was developed by Robotality, published by Chucklefish, and released on 22nd July, 2014 on Steam and GOG Dot Com.

Its events occur aboard a massive colony ship, Goliath, whose inhabitants went to cryosleep while the vessel was travelling faster than light towards their home. However, the survivors suddenly awaken halfway into their journey, to find that the ship is now out-of-control and randomly changes direction every few hours, while its halls are taken over by the hostile cyborgs, most of whom were once fellow crewmembers. Luckily, a former space marine and current Goliath security guard Morten Lannis survived, and now it's up to him to locate the other survivors and assemble them into a squad that can reclaim the ship back from the horrors infesting it.

The following tropes are present in Halfway: