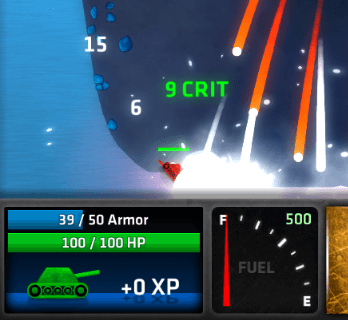 In the context of some video games, sometimes body armor just provides a bonus to the owner's maximum Hit Points. Rather than add any kind of specific protection to certain attacks, a character wearing body armor will just gradually have it chipped away whenever they are hit, in the same manner as their usual hit points. If enough damage is sustained, the extra body armor may simply vanish.

It is not usually visible on a character, and acquiring it puts the object to use instantaneously, so the player character is never seen discarding it. This trope is, obviously, not particularly realistic. Ironically, it became popular with many "realistic" shooters because putting on body armor seemed a more plausible way of improving a character's hit points than having them grab a first aid kit and immediately gain the benefits from using one in the middle of a firefight. Generally necessary for the sake of game mechanics, although this is less true today than it was ten years ago.

A variation of this which generally is considered to make more sense is Full-body Deflector Shields As Hit Points. After all, energy which specifically covers your entire person and uses energy to protect should be able to help protect you from anything as long as its energy supply is sufficient, right?

Possibly a bit of Truth in Television (or videogames rather). While theoretically modern ceramic body armor can only eat X or Y number of hits before the plates have completely disintegrated, in practice it depends on angle, shot spacing, round type, velocity, ceramic armor type, backing, and so many other factors that in some cases one can't even rely on the basic rating.