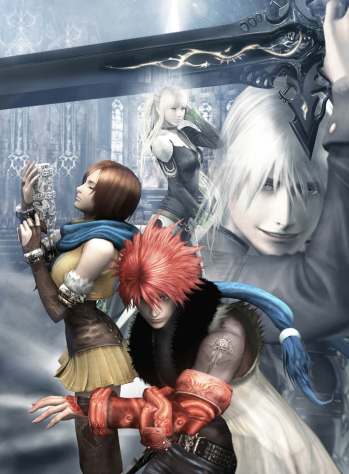 Chaos Legion is a gothic opera and Hack and Slash game developed by Capcom, released in 2003 for the PlayStation 2 and PC (a version which suffered from a bad case of Porting Disaster). The game is a loose adaptation of a seven-part light novel series of the name same by Tow Ubukata, known for his work on Mardock Scramble, Fafner in the Azure: Dead Aggressor, Le Chevalier d'Eon, Heroic Age, and Ghost in the Shell: Arise.

Sieg Wahrheit and Victor Delacroix used to be the best of friends. Unfortunately, Delacroix has fallen to The Dark Side—Sieg, Delacroix and their lovely lady friend, Siela, were trying to seal away the Dark Spirit Azrail as it tried to escape. For some unknown reason, Sieg murdered Siela right before Delacroix's eyes. Or did he really...?

Now, in the present day, Sieg is in hot pursuit of Delacroix, who plans to gather the seals that hold back Azrail in order to release it, which he thinks will reunite him with Siela. Sieg will not have it easy—Delacroix has summoned many hordes of demons who want nothing more than to kill Sieg. However, Sieg is a "Knight of the Dark Glyphs" and a "Legionator." A Legionator is one who has the ability to summon "legions," powerful and massive creatures (legionnaires) that will fight alongside their caller, defending and attacking when commanded to do so. Armed with a sword and his legions, Sieg is more than ready to discover the truth.

The seven legions are loosely based on the Seven Deadly Sins, and Sieg can bring two at a time for each mission.