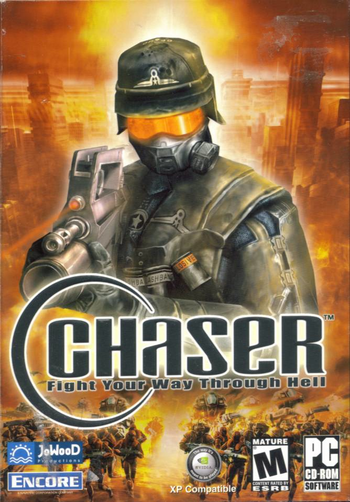 Chaser is a 2003 sci-fi First-Person Shooter for the PC (now available on Steam and GOG) developed by Cauldron, an Eastern European developer known for making "budget" first-person shooters such as Soldier of Fortune: Payback, The History Channel: A Nation Divided and Battle in the Pacific, and Jurassic: The Hunted.

The game takes place in the year 2044, and follows the adventures of John Chaser, an amnesiac soldier with a price on his head who stumbles from one location to another on dystopian Earth as he gets drawn into the conflict between the tyrannical MARSCORP Mega-Corp and the martian resistance. The game's plot is transparently a Whole Plot Reference to Total Recall (1990).

The game's most notable features are its rendering of a few dozen different real-world firearms (with a surprising absence of any sci-fi "space guns" despite the sci-fi setting), its huge levels, and a Bullet Time mechanic known as adrenaline mode (although it's much less of a core gameplay element than in F.E.A.R. or Max Payne).