Weapon Across the Shoulder 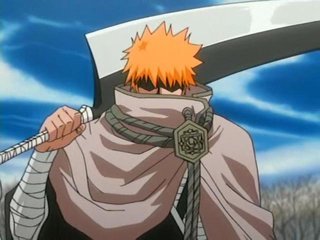 You should know not to mess with a dude who rests his sword this awesomely.
Advertisement:

A popular pose for swordsmen, gunslingers, or any other title that is describing a specific weapon user. This is when someone who forgoes carrying a sheath or holster and instead lets their weapon rest lazily slung over their shoulder when not in use. This is often invoked by characters whose weapon diagonally Sticks to the Back. It carries the I-Don't-Give-A-Damn effect while making the weapon look cooler. It does have some level of practicality: a particularly large blade or gun is difficult to hold in any other way.

This can be safely done in real life if you're careful and have the proper training or just have the right weapon. A single-edged blade has a blunt back which can be harmlessly rested on the shoulder; the popularity of this trope in Japan is probably related to the katana and other single-edged blades being the most common there. A double-edged sword can add danger, but that depends on exactly how sharp the sword is, what clothes or armor you're wearing, etc. The flat of a double edged blade provides a side to rest it on as long as you watch out for the edge that's facing your head or neck. Polearm and blunt-weapon users usually don't have to worry about such problems however.

Related to Stab the Sky and Staring Through the Sword.