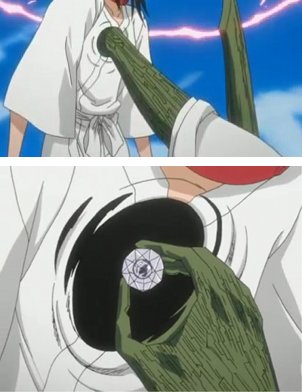 So that's where you hid the family jewels!
Rick: You're gonna have to do me a real solid. When we get to customs, I'm gonna need you to take these seeds into the bathroom, and I'm gonna need you to put them way up inside your butthole, Morty.
Morty: In my butt?
Rick: Put them way up inside there, as far as they can fit!
Morty: Oh, geez, Rick. I really don't want to have to do that.
Rick: Well, somebody's got to do it, Morty! Th-these seeds aren't gonna get through customs unless they're in someone's rectum, Morty! Th-they'll fall right outta mine! I-I've done this too many times, Morty!
— Rick and Morty, "Pilot"
Advertisement:

This trope is about using a person as a walking safe. Or a dead safe, in some cases. Despite the name, the treasure can be hidden in other body parts, and with or without the person's knowledge. Smugglers may willingly have themselves (or others) surgically altered to hide objects inside of them. In some instances the hidden item may be parked inside the person's Soul or odder "places", as if in a spiritual Hammerspace. Taking the item out may require surgery (hopefully Psychic Surgery to avoid Scars are Forever), or may be simple if they've been surgically given "pouches".

See also Stomach of Holding and Person of Holding. Compare Victoria's Secret Compartment, Trouser Space and contrast Sealed Inside a Person-Shaped Can.

Fishook has the elevator button Luigi needs under his eyepatch.

Fishook has the elevator button Luigi needs under his eyepatch.