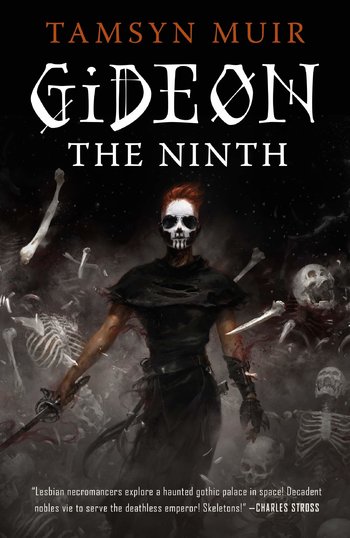 IN THE MYRIADIC YEAR OF OUR LORD—the ten thousandth year of the King Undying, the kindly Prince of Death!—Gideon Nav packed her sword, her shoes, and her dirty magazines and she escaped from the House of the Ninth.
Advertisement:

Gideon the Ninth is the first book in The Locked Tomb Series by Tamsyn Muir. It was released on September 10th, 2019.

Gideon Nav is a foundling who was taken in by the ancient House of the Ninth, last of the Emperor's great Houses, on the day she was born. She and Harrowhark Nonagesimus, the heir of the house, are the only children left on a planet otherwise populated by animated skeletons and dying cultists. Gideon has been trying to escape for nineteen-odd years, despite Harrow blocking her at every turn.

After her latest failure, a new opportunity arises. Harrow has been invited to the First House to attempt to become a Lyctor, an immortal saint of the Emperor. Tradition and propriety require her to have a personal cavalier, a sword-fighter sworn to her service. Unfortunately, there are no appropriate candidates left in the House of the Locked Tomb, so Harrow convinces Gideon to take the job instead.

The First House, however, isn't quite what either of them expected. Instead of being instructed in the most ancient secrets of necromancy, the heirs of the Houses are set loose in a haunted tower with no guidance or assistance. They are expected to somehow discover the secrets of Lyctorhood by searching through ten thousand-year-old experiments left behind by the original Lyctors. Harrow abandons Gideon immediately, leaving her to wander around aimlessly, listening in on the heirs of the other Houses, from worlds populated by more than senior citizens and bone constructs. She spends most of her time bored out of her skull.

And then people start dying.