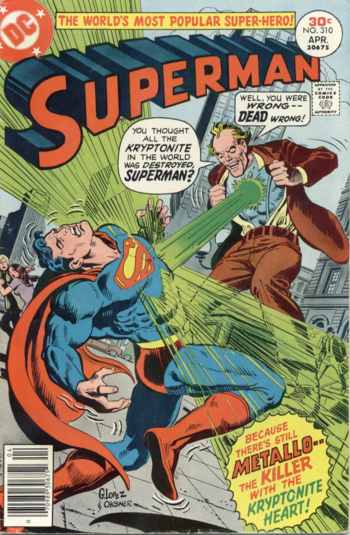 What's the matter, guy? You're looking a little green at the gills.
Supergirl: That green tinge around you — he used Kryptonite against you!
Superman: Not only... used it... he is it!
Supergirl: What?! A... Kryptonite Man?!
— Supergirl (1982)
Advertisement:

If a character has an Achilles' Heel — and especially if that character has a Weaksauce Weakness — inevitably an opponent comes along who is basically made of or otherwise works solely in the medium of Weaksauce. Examples abound, especially in DC Comics. This trope is essentially the ultra-specific, ultra-literalist version of Good Hurts Evil or No Man of Woman Born. Less commonly, a character with no existing vulnerability ends up against a character who introduces a unique weakness of theirs.

As these characters revolve around the concept of possessing an innate advantage over the hero, writers often have them fall victim to Crippling Overspecialization to avoid letting them dominate the story. If the power they rely on is an especially obscure weakness, they can often fall to humiliating defeats by opponents vastly beneath their primary target who don’t suffer the same handicap, or at least not as severely. Even worse for those confronted with their main target if they happen to acquire a Kryptonite-Proof Suit to deal with them on a more level playing field. This tends to lead to examples of this trope being stuck as relatively minor villains, all but useless when away from their chosen prey. The few villains that are skilled, intelligent, and powerful enough to avoid this fate are usually relegated to the upper echelons of the Sorting Algorithm of Evil for the sake of story balance.

For obvious reasons, this is primarily a Comic Book Trope.

Closely related to Kryptonite Is Everywhere and Depleted Phlebotinum Shells. Counterpart to the Kung Fu-Proof Mook. Combine both to create a That One Boss or worse. Contrast This Looks Like a Job for Aquaman, which occurs when a situation is tailored to avoid a hero's Weaksauce Weakness and utilize their lame power of heart. If the hero manages to defeat this character anyway, it's a form of Scissors Cuts Rock and will often include a scene of Fight Off the Kryptonite. A subtrope of Meta Power.