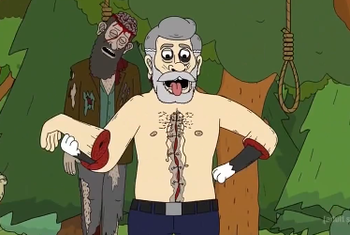 The ploy of taking over a dead person's identity.

This can be for any number of reasons. Perhaps the character was a drifter, with no identity of their own worth speaking of and enticed by the possibility of assuming the role of their recently deceased acquaintance. They may have promised to protect the person's loved ones, want to escape their old life, or less heroically intend to con their new "family" out of money. If anyone questions their changed appearance, accent, or other details, there's often a Conveniently Unverifiable Cover Story they can use to explain it away.

Usually the impostor will end up Becoming the Mask, falling in love with the life that isn't his, and be exposed. Happily, though, he will regain the trust he lost by some act of heroism, and remain among his new loved ones. Whether it's with his own or the new name varies.

More maliciously, a villain will do this after they kill the other person. This is often paired with a subsequent Peek-a-Boo Corpse, when the original person's body is discovered by someone, making them realise what has happened. A common occurrence in murder mysteries is for the killer to do this in order to throw off the time of death and give themselves an alibi. Having such an impersonation can create Dramatic Irony if the audience is aware of the ploy, or a plot twist if they are not.

Occasionally the impostor will be played sympathetically, in which case they may be forced to assume the dead person's identity to escape death themselves. Or, in a subversion, they could have been misidentified after a mass-casualty incident, and refrained from pointing out the mistake due to fear of prosecution, sympathy for the dead person's loved ones (who believe the deceased "miraculously survived!"), or even amnesia.

Related to My Sibling Will Live Through Me. Can result in an Impersonation-Exclusive Character if revealed to be the case with an already-established character. Compare The Mole, Rags to Royalty, The Real Remington Steele, Prince and Pauper.

Contrast Lost in Character, where a professional actor takes on a role and forgets their original self. If you don't just take the other person's identity, but also their appearance, it's Replicant Snatching. If it's a temporary thing, a sort of masquerade where characters pretend the dead one is alive, it's an Of Corpse He's Alive situation, or the El Cid Ploy. If you're a time traveler, and are doing this so history stays on track, it's You Will Be Beethoven. If you're literally impersonating a dead person, that's Playing Possum.

A newspaper clipping shows that Stan Pines had been dead for years, and that a grifter who looks like the man we know as Stan is at large

A newspaper clipping shows that Stan Pines had been dead for years, and that a grifter who looks like the man we know as Stan is at large