Recap / The Simpsons S9 E2 "The Principal and the Pauper" 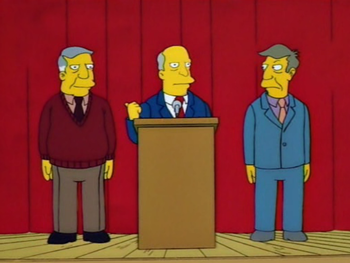 Principal Skinner's 20th anniversary as school principal is interrupted by a Vietnam vet who reveals that his name is Seymour Skinner and that the man posing as him is a reformed street punk named Armin Tamzarian.

The episode was loosely based on the short story The Improbable Impostor Tom Castro by Jorge Luis Borges.