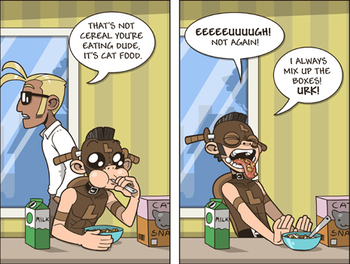 Alice and Bob are at a party and Bob starts to get a little hungry. So when he sees some food on a tray he helps himself to it. Cue Alice coming over and telling Bob he just ate the pet's food. Bob is either disgusted and spits the stuff out or shrugs and keeps eating the food.

Similar to You're Drinking Breast Milk and sub trope to I Ate WHAT?!. This is the unintentional version of Dog Food Diet.

May be related to Feed by Example