Recap / The Simpsons S9 E1 "The City of New York vs. Homer Simpson" 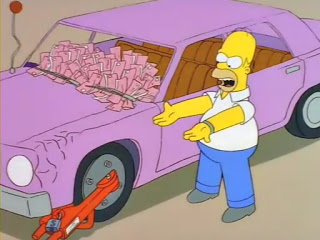 In this, the ninth season premiere, Homer's car is illegally parked (by Barney Gumble) in New York City next to the World Trade Center and Homer (who had a bad experience in NYC when he was a teenager) is forced to take his family there to retrieve it.

Example of:
The Big Rotten Apple