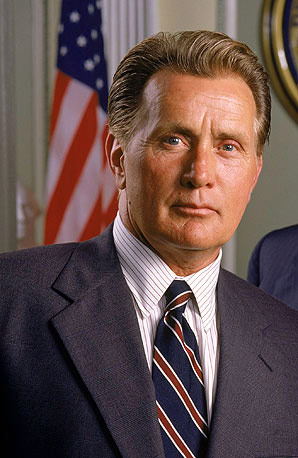 Ramón Gerardo Antonio Estévez (born August 3, 1940), better known by his Stage Name as Martin Sheen, is an acclaimed American actor, best known for his portrayal of President Jed Bartlet on The West Wing, which earned him several Emmy nominations, a Golden Globe, and two SAG Awards. He has one Emmy, for, of all things, a guest appearance on Murphy Brown in the early 1990s.

Prior to The West Wing, Sheen had a lengthy career in film and television, with his most famous role undoubtedly being the lead in Apocalypse Now. Other notable parts include The Subject Was Roses, Badlands, Gandhi, The American President (an earlier Aaron Sorkin work where he played the White House Chief of Staff character instead of the President) and The Departed. He also voices (and supplies the appearance of) The Illusive Man of the Mass Effect series. Most recently he played Uncle Ben in The Amazing Spider-Man reboot series.

Sheen is also known as the father of a number of other actors, most notably Charlie Sheen (who, alone of his siblings, makes use of his father's stage surname) and Emilio Estevez. He has appeared with his children in a couple of films, most notably as Charlie's father in Wall Street and starred in The Way (2010) which is directed by Emilio (who played his character's son), and eventually co-starred with Charlie on his FX sitcom Anger Management. His daughter Renee Estevez had a recurring minor role on The West Wing as the president's secretary.

He's well known for putting on jackets by flipping them back over his head, the result of his left arm being partially paralyzed after it was damaged by forceps during his birth.

Not to be confused with British actor Michael Sheen.

President Bartlet and Governor Ritchie tell each other why they don't like each other.

President Bartlet and Governor Ritchie tell each other why they don't like each other.