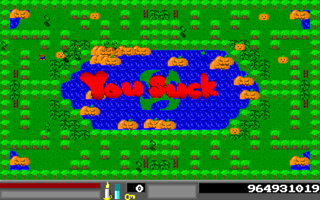 As if hearing Bouapha explode into Ludicrous Gibs isn't enough.note His remains are near the top-left corner of the screen.
"We did the rather cruel thing of destroying a fanboy. There was a lot of laughter on the set when we finally executed that fucker, I can tell you! Well justified."
— Andrew Cartmel

on Doctor Who, "The Greatest Show in the Galaxy"
Advertisement:

Aiming a jab at the audience, usually for being such losers that they'll waste their time watching/reading/playing this nonsense, such moral degenerates that they'll enjoy sleazy pandering to their base impulses, and/or so dumb they'll pay good money for it. In pinballs, videogames, and other similar works, this extends to mocking the player's lack of skill.

Not to be confused with This Loser Is You (an audience-identification figure who is so pathetic that the audience doesn't want to) or You Bastard! (where a work tries to make the audience feel guilty for enjoying it or choosing to consume it). Straw Fan is a subtrope where the audience is personified by a character in the work. Usually tied up with Self-Deprecation, possibly saying that the creator is a talentless hack who got lucky or is just in it to squeeze money out of the fans, but they're too dumb to realise it. Compare with Biting-the-Hand Humor, where the show mocks their paymasters, such as the network or publishers, as well as how some of these examples attack the very people who are paying for or watching the product. May also overlap with Easy-Mode Mockery if a video game makes fun of the player for playing the game on the easiest difficulty setting, with Achievement Mockery if achievements are awarded for the player screwing up, or Completion Mockery for just completing part of a game (if not the whole game) in general when it isn't necessary to win.

This is usually just a friendly ribbing; it's rare for the creator to actually hate the fans and try to drive them away. However, it is sometimes combined with Artist Disillusionment. This is sometimes a result of a Trolling Creator—but if it goes along with a Dear Negative Reader, look out! Can overlap with The Diss Track if it's a song.

Don't you have anything better to do than browsing TV Tropes?
No.

The Taskmaster responds to his critics who disapprove of his judgements.

The Taskmaster responds to his critics who disapprove of his judgements.