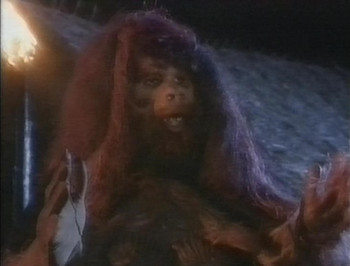 GELF
One morning, Rimmer is trying to wake up Lister and Cat in order to take part in a battle drill, which the latter two are as unenthusiastic about as your might expect. Still, they do set a new record for the shortest amount of time to arrive at battle stations, at just one hour and seventeen minutes. Rimmer angrily tells the duo that their attitude could cost them dear in an actual battle, but Lister argues that their lack of any real armaments is probably going to be a much bigger problem. Lister then gets support for his argument, albeit not exactly in the manner that he wanted; a Space Corps Enforcement Probe emerges from warp right next to Starbug, and makes a garbled accusation that the crew have been looting Space Corps derelicts. Which is quite a problem, seeing how they're very much guilty of that. Worse still, the punishment is death.
Advertisement:

The probe asks them how they plead, but Kryten informs the rest of the crew that this is just a formality, and that it'll kill them regardless of how or if they respond. In the lack of a better plan, they set course for GELF space, where the probe won't follow them. Before it gets there however, Starbug suffers crippling damage, and is forced to ditch in a lake on a moon occupied by the Kinitawowi, a tribe of ape-like GELFs. While the ship's automatic repair systems can deal with most of the damage, their oxygen generator is damaged beyond any hope of repair, and so the four go to meet with the Kinitawowi, who have a reputation for being comparatively friendly, along with being prolific traders. They are also skilled in rearing Emohawks, a smaller, domesticated version of the Polymorph previously encountered by the crew, which they use to steal emotions, apparently a valuable trading commodity.

Fortunately, the Kinitawowi have the required part, and are willing to trade for it. Unfortunately, their price is Lister staying on the moon and marrying the daughter of the tribe's chief. Once again lacking a better plan, the crew make Lister go through with the marriage and tell him to sneak out and return to Starbug in the night. Unfortunately, Lister is unable to even bring himself to do that, and flees from the village only minutes after his amorous bride starts making the moves on him. Lister's new father-in-law is naturally pretty smegged off by this, and sends his Emohawk after them to extract payment in the form of their emotions.

Despite the crew's usual caution and attention to detail, the Emohawk gets on-board Starbug. The Cat gets the scent of something unusual, but when he investigates the Emohawk ambushes him and sucks out all his cool, turning him into Duane Dibbley. Rimmer decides that a suspicious-looking gun must be the Emohawk and flushes it out into space, despite Duane trying to warn him that if he's wrong, he's flushing away their only weapon. Turns out Duane was right, and moments later Rimmer finds himself being Emohawk'd. He loses all his bitterness, and is left as Ace Rimmer.

Ace locks Lister and Kryten in the engine room and tells them that he and (unbeknownst to him) Duane are going to perform a Heroic Sacrifice and decompress the rest of the ship in order to kill the Emohawk. Fortunately, Lister and Kryten are able to stop Ace and work out an alternative plan to freeze the Emohawk, then extract and restore Rimmer and Cat's full personalities. They go looking for the creature, bemoaning how hard it is to actually find a shape-shifting creature, but quickly find a prime suspect when Duane suddenly finds himself with an extra Thermos flask.

The Emohawk has one last trick up its sleeve however; apparently it can transform itself into working machines and weapons, and so transforms itself into a hand grenade. Duane can only throw it six inches away, and so Ace throws himself upon the grenade, taking the blast. His hard light drive withstands the explosion, and Lister and Kryten freeze the Emohawk, saving the day. Ace requests to stay as he is for another 24 hours, but Duane is all too eager to become the Cat again. Unfortunately, it seems he'll have to wait a little longer, as he accidentally sprays the other three with the freezing gas.

A pet of the GELFs, the Emohawk is a spayed polymorph - and just as much a shapeshifter as its non-neutered cousins...

A pet of the GELFs, the Emohawk is a spayed polymorph - and just as much a shapeshifter as its non-neutered cousins...