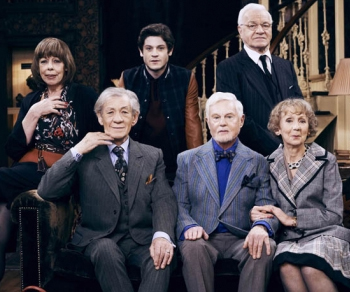 Front L-R: Freddie, Stuart, and Penelope.
Back L-R: Violet, Ash, and Mason.
Ash: I want to have the kind of love they do one day.
Freddie: [Enters] Where is that miserable piece of shit?!
Stuart: Right here, you walking corpse.
Advertisement:

Vicious (originally Vicious Old Queens) is a Brit Com/Dom Com that aired for two series on ITV in the UK and on PBS in the US from April 2013 to December 2016. Starring Shakespearian Actors/nerd icons Sir Ian McKellen and Sir Derek Jacobi, the series follows a wealthy-albeit-bitter gay couple and their friends.

The starring couple consists of Freddie (McKellen), who is a failing yet egotistical actor, and Stuart (Jacobi), who is still struggling to come out to his mother. The cast also includes their old friends Violet, Penelope, and Mason, and their young neighbour Ash.

Whilst the show is essentially about vicious old homosexuals sniping and insulting one another, the presence of McKellen and Jacobi affirms that it's better than it sounds. Also, despite the pilot receiving a mixed critical response, the show currently has a strong fan following.

As with many British shows, it aired for two short series, along with a Christmas special and a Grand Finale, for a total of 14 episodes. There was also a two-year gap between Series 1 and Series 2, due to the cast's obligations in other high-profile productions.