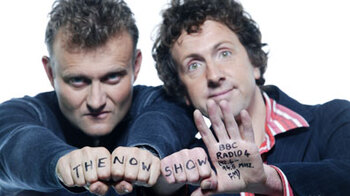 The Now Show is a British satirical radio show on BBC Radio 4, starring Hugh Dennis and Steve Punt (previously of The Mary Whitehouse Experience). They were previously joined by Marcus Brigstocke, Mitch Benn, Laura Shavin, and the very short Jon Holmes with the occasional guest. These regular performers were eventually all dropped by 2016note in Brigstocke's case, he had other commitments and eventually withdrew when it became clear that appearances by "guest Marcus Brigstockes" would far outnumber the real ones in favor of rotating guests to provide more diverse humor and viewpoints.

Known for heavy use of Running Gags: The Other Wiki used to have a long list of them, and may still do.

When Radio 2 had a Saturday comedy slot, Punt and Dennis (and often the same guests) had another show in that slot, It's Been A Bad Week, which was about weird news stories from around the world. Each week the stories' protagonists competed for who's had the worst week, thus winning "The Worst Week Of The Week Award, Awarded Weekly On A Week-By-Week Basis".

The Now Show provides examples of:

It's Been A Bad Week provides examples of: