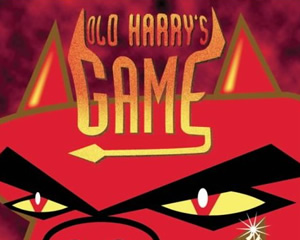 "I am Satan - Master of Flesh and Ruler of the Abyss. Many times you have summoned me, with your naked pagan dances and your sacrificial bloodlettings, but now I have chosen to manifest myself to you so that you may know my will. ... that I, Satan, thy Lord and Master do hereby command all gathered here for this most profane and satanic ritual to stop now as it's embarrassing."
— Satan - Old Harry's Game Series 3, Episode 1
Advertisement:

Old Harry's Game is a British radio comedy written and directed by Andy Hamilton. The main character is Satan (yes, that Satan), who acts like a world-weary, cynical prison warder, presiding over an increasingly run-down and over-crowded Hell.

Many of the plots of the first four series involve Satan having lengthy philosophical discussions with the Professor (James Grout), a Wide-Eyed Idealist and Flat-Earth Atheist. Satan would often try to persuade the Professor that Humans Are Bastards, while the Professor would take the opposite view. Satan's chief minion was originally Gary (Steve O'Donnell), replaced by cringing lackey Scumspawn (Robert Duncan). Other characters included Thomas Crimp (Jimmy Mulville), a man with no redeeming qualities (and the driver of the car that killed both himself and the Professor), and numerous historical figures who had somehow ended up in Hell (including foul-mouthed Jane Austen, hypocritical Thomas Jefferson and meretricious Will Shakespeare).

In season five, Satan left Hell, inverting his usual role by visiting world leaders and trying to persuade them to get people to live more virtuous lives in order to ease the over-crowding in Hell. At the end of each episode he would return to Hell in order to sort out the messes his subordinates had made in his absence.

Season six introduced Edith (Annette Crosbie), an academic who agreed to write a biography of Satan in return for him looking into the mysterious events surrounding her death. (She's also Thomas's mother-in-law, and loathes him as much as ... well, anyone who's met him. Naturally, Satan makes them roommates.) In season seven, a dog and a baby arrive in Hell, due to a cock-up in Heaven's new computer systems; Satan ends up trying to locate the baby's new parents, while Thomas, surprisingly, finds himself literally Petting The Dog.

The show is lighter and funnier than it sounds, and usually manages to avoid being Anvilicious in its handling of weighty philosophical issues.

The title is a reference to Old Harry (a nickname for the Devil) and Harry's Game (a 1980s British TV drama).

A clay-motion television pilot was produced in 2012, but did not ultimately lead to a series.