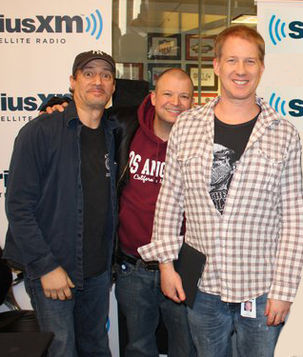 The Opie & Anthony Show was a radio show hosted by Gregg "Opie" Hughes, Anthony Cumia and Jim Norton. The show, nicknamed O&A, originated at Long Island radio station WBAB-FM in 1994, when Opie, then host of the "Nighttime Attitude", invited Anthony in as a guest co-host after airing a parody tune from his band Rotgut, "They're Gonna Electric-Shock O.J.". The pairing was successful enough for the station to bring Anthony on full-time. O&A moved to Boston-area radio station WAAF-FM in 1995, and their stint at WAAF lasted until 1998, when they made headlines by getting fired after airing an April Fools Day fake report of Boston mayor Thomas Menino getting killed in a car crash. O&A next surfaced on New York's WNEW-FM, where their show ran from 1998 to 2002. This time it was an incident involving two listeners simulating sex acts in St. Patrick's Cathedral that got them kicked off the air.

After a contractually-imposed two-year hiatus, The Opie & Anthony Show moved to XM Satellite Radio in the fall of 2004, where they could do edgier, uncensored material. (They still had to deal with corporate policies and lawyers, however.) The show aired on the newly-merged SiriusXM and had a brief (edited) run on syndicated terrestrial radio from 2006 to 2009.

he had been fired by SiriusXM after ten years of broadcasting. The show was then renamed Opie with Jim Norton. After a falling out, Opie and Jimmy began hosting separate shows in October 2016 (the latter hosted by Norton and O&A producer Sam Roberts). Anthony has hosted The Anthony Cumia Show since August 4, 2014 via his subscription platform, Compound Media

Tropes that apply to this radio show include:

But enough of this palaver, let's get the show on the road!