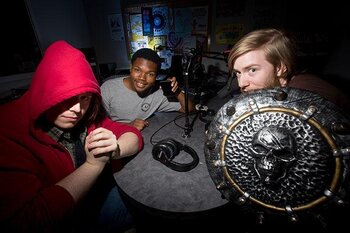 "Why? What do you mean 'why'? Why do we do anything around here? Because the plot demands it!"
— The DM explaining the show in seven seconds
Advertisement:

In a world where an epic band of adventurers roams the countryside, scouring dungeons and facing grave threats to all of existence with marvelous magic and massive might, these legends shall be forever engraved in the tomes of history.

THIS...is not their story.

Parties & Parodies is the ever-going tale of the Order of the Half-Priced Heroes, a radio drama that follows the adventuring party on an epic quest as they strive to force back the shadow creeping across the land. Hosted and DM'd on WUOG 90.5 FM by their very own DJ Ninjay (with a rotation of victims — I mean other players), the show features 2-3 hours of comedy and heroism as the players try to foil the Dungeon Master's plans (after all, he IS the one controlling all the villains).