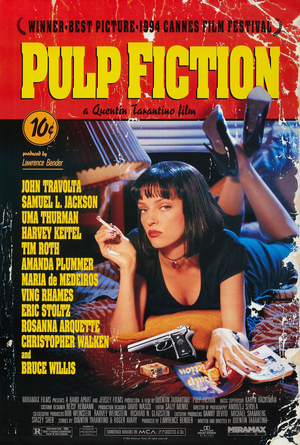 You won't know the facts until you've seen the fiction.
Honey Bunny: I love you, Pumpkin.
Pumpkin: I love you, Honey Bunny... [both pull out their guns] Everybody, be cool, this is a robbery!
Honey Bunny: Any of you fucking pricks move, and I'll execute every motherfucking last one of you!
(cue Misirlou

The first is about two hitmen, Jules Winnfield (Samuel L. Jackson) and Vincent Vega (John Travolta), who are out to retrieve a briefcase stolen from their employer, Marsellus Wallace (Ving Rhames). This leads into two subplots, one about Vincent being ordered to also take Marsellus's wife Mia Wallace (Uma Thurman) out for a night on the town while Wallace is out of town doing business, and another about Jules and Vincent accidentally shooting a guy named Marvin in the face and trying to clean it up.

The second is about an aging boxer named Butch Coolidge (Bruce Willis) who is paid by Wallace to throw a fight. Instead, Butch bets on himself and wins (the other boxer drops dead of a heart attack during the fight in the process), making swift plans to leave the country straight after. But before he can do this, he has to recover a certain gold watch that belonged to his father, which promptly leads into the weirdest day of his life, involving Marsellus and a pair of seriously nasty hillbillies.

The third story, which bookends the film, is about a pair of robbers called Pumpkin and Honey Bunny (Tim Roth and Amanda Plummer) who spontaneously hold up a restaurant — a restaurant that Jules and Vincent are eating in.

The film is also somewhat infamous for the controversy over proper writing credits. The Gold Watch chapter originated as an original script by Roger Avary. Tarantino bought the script with the intention of adapting it, as one would do a novel. In the final credits, Avary is given a "story by" listing.

Other actors in the All-Star Cast include Harvey Keitel as the Wolf, a crime-scene cleanup specialist; Eric Stoltz as Lance, a drug dealer who helps out Vince in a moment of crisis; Rosanna Arquette as Jody, Lance's girlfriend with a fondness for body piercings; Christopher Walken as Captain Koons, who went to a lot of trouble to deliver a family heirloom to young Butch; and Frank Whaley as Brett, a young punk who tries to double-cross Marsellus.

Not to be confused with actual pulp fiction as a genre (an influence for the film), which is found under Pulp Magazine.