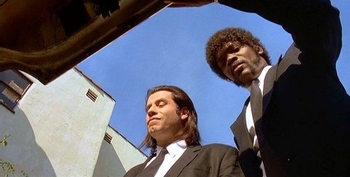 A specific type of Compartment Shot, which involves a character placing or retrieving something (or someone) in the trunknote boot, if you're using British English of a car. POV will usually be from within the trunk looking up at the character opening it, sometimes from the actual POV of a character who's been stuffed into the trunk.

Popularised by Quentin Tarantino who has a Trunk Shot in all of his films.

See Punk in the Trunk for one of the ways this shot can be used. Distant relative of the Huddle Shot.