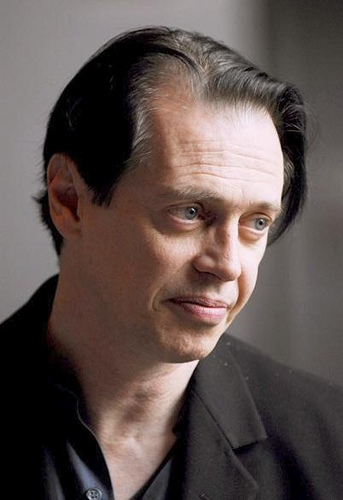 Steven Vincent Buscemi (born December 13, 1957 in Brooklyn, New York) is a character actor beloved of The Coen Brothers, Adam Sandler, Quentin Tarantino, and anyone and anything related to the world of independent cinema.

In a career spanning over thirty years, Buscemi has carved himself a niche playing an assortment of freaks, losers, weirdos, creeps, and psychos. It is possible that his role as a man who gets fed through a woodchipper may well have him forever pegged as that "kinda funny lookin'" guy.

In addition to his work as an actor, he's also directed a number of feature films and episodes of such television series as Homicide: Life on the Street, OZ, Nurse Jackie, and The Sopranos, notably the latter's celebrated "Pine Barrens" episode.

Buscemi later stepped out of his "creepy weirdo" oeuvre to play the lead character Enoch "Nucky" Thompson in HBO's Prohibition Era drama Boardwalk Empire, and in The Death of Stalin, he played the closest thing the movie had to a hero, Nikita Khrushchev.

Prior to his acting career, Buscemi was a firefighter with the FDNY. On 9/11, he dropped everything he was doing and went to help out his old firehouse once news of the attack broke.