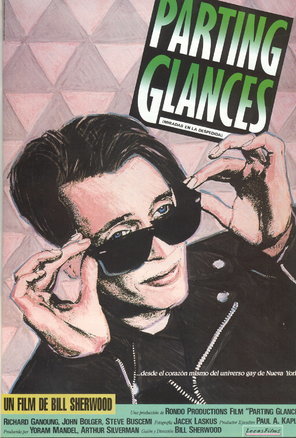 Michael: What’s the video?
Nick: It’s my will.
Michael: Put it away...
Nick: I’m just showing you where it is.
Michael: What bullshit. You know France is working on this new-
Nick: -new drug, which we should get by the year two thousand. Maybe we should go to France.
Michael: Okay.
Advertisement:

Michael (Ganoung) and Robert (Bolger) are a 20-something gay couple living in New York City. While they are still in love after many years together, issues are starting to crop up as Robert is leaving for a two-year work assignment in Africa and Michael is staying behind. The film depicts the 24-hour period leading up to Robert’s departure, showing the couple attend a private dinner hosted by Robert’s boss and a going-away party hosted by their friend Joan (Kinney), as well as scenes of Michael caring for his friend and ex-boyfriend Nick (Buscemi, in his film debut), who has AIDS. Things are further complicated when Robert’s true motives for leaving are revealed.

The only film by Sherwood, who died from AIDS complications in 1990. Due to its realistic portrayal of urban gay life during the height of the AIDS crisis, as well as being one of the first films to address the pandemic, it is considered highly important in the history of gay cinema.