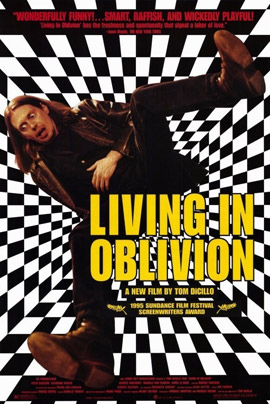 Tom DiCillo's 1995 film, starring Steve Buscemi, Catherine Keener, Dermot Mulroney and Peter Dinklage is a quintessential movie about movies. It tells the story of Nick, the director of a low-budget indie film, trying to keep everything together as his production is plagued with an insecure actress, a megalomaniac star, a pretentious, beret-wearing director of photography, and lousy catering. Divided in three acts, each representing a different scene to shoot, this film is essential for amateur filmmakers.
Advertisement:

No relation to the blog where Chris Livingston plays a Non-Player Character in The Elder Scrolls IV: Oblivion.