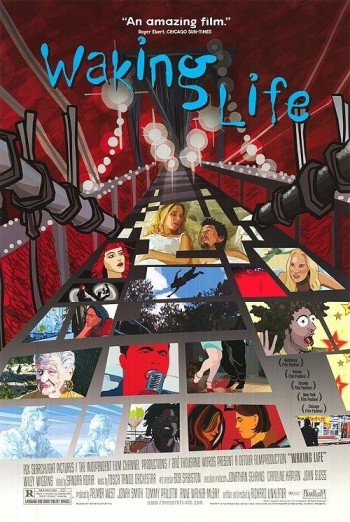 Waking Life is a 2001 semi-animated film by Richard Linklater. The plot follows a young man walking through a lucid dream where he observes and enters into dialogue about lofty philosophical concepts and theories. The film itself was initially shot on digital video, and then drawn over by a team of animators. The resulting look is fairly unique, and manages to evoke dream-like imagery on a shoestring budget.

Despite lacking a traditional plot, visuals, or even trained actorsnote excluding Ethan Hawke, Julie Delpy, Wiley Wiggins..., the film won a great deal of praise for its innovation and unique look. Roger Ebert added it to his list of Great Movies in 2009.

This rotoscoped animation provides examples of:

Super perfundo on the early eve of your day...