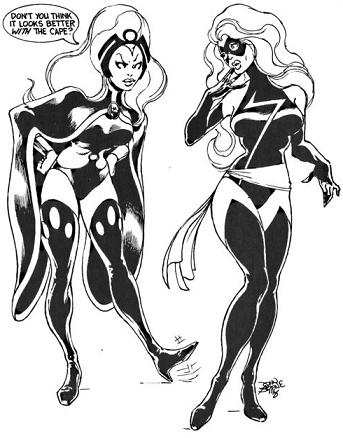 A swimsuit and high boots? Storm did it first!note Both characters (Storm and Ms. Marvel) were designed by the same artist, Dave Cockrum.
"There is no originality left in the world, Mr. Heep. That is a sad fact I've come to live with."
— Movie critic Harry Farber, Lady in the Water
Advertisement:

A lengthy joke in which a character describes some new idea, invention, story or script, only to be informed that somebody already got there before him and that all the tropes he thinks are new are in fact Older Than They Think. The punchline is usually a ridiculously mundane or roundabout name for the proposed "new" work, and for added humor value, the story that the character has unknowingly plagiarized is usually something mind-bogglingly well known.

It's based on the well-known phenomenon that there are so many things out there it's incredibly hard to come up with something new, especially since "Seinfeld" Is Unfunny and oftentimes, people get the idea inspired by something. (Even the great J. R. R. Tolkien's stories were inspired by pulp fantasy writers in the 1930s and borrow heavily from Germanic myths about a ring that gives massive power to whoever wears it...sound familiar?)

There are many other ways of phrasing this, including:

The surest way to avert this trope is to put enough old things together that the ensuing Combinatorial Explosion results in something new or unexpected.

Compare It Will Never Catch On, We Have Those, Too, and Didn't We Use This Joke Already?. The Zeroth Law of Trope Examples explains how Shakespeare did it before. Yes, We Do Have This One is this happening for creating TLP

. For how the hearts of budding artists may be quickly crushed, see TV Tropes Will Ruin Your Life. For when this reaction occurs in-universe and/or entirely from the perspective of a single character, see Never Heard That One Before.

Due to numerous copyright laws, there is a legal term called "scene-a-faire" which translates to "scene that must be done." It's a possible grounds for dismissal if a copyright claim includes numerous events and ideas that are common within the medium or genre. A Police Procedural will have an interrogation scene. A Medical Drama will feature CPR. A Horror film will have a Cat Scare.

Fittingly, this trope itself is Older Than Dirt.

Which may be alluding to the famous anecdote (parodied e.g. in a Monty Python sketch) about Oscar Wilde and the painter Whistler, after the latter had come up with a particularly witty and devastating line.
Wilde: I wish I had said that!
Whistler: You will, Oscar, you will.

Polly tries to tell a story of something that has happened before...again.

Polly tries to tell a story of something that has happened before...again.