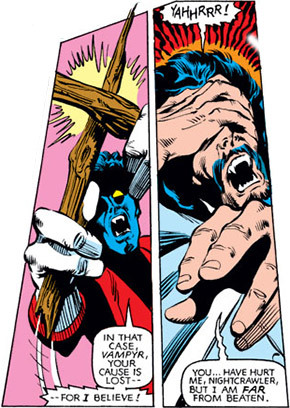 Yes, we realize the irony of a demon-looking Mutant saying he believes in God while holding up a improvised cross against a vampire.
Advertisement:

A combination of Holy Burns Evil and Improvised Weapon. A character is being cornered by a vampire. Desperate, she grabs two sticks from the ground and puts them together in the form of a cross in front of her. The vampire instantly starts hissing and covering its face with its cape, as if the thing was just plied from the church wall.

Can be applied to various objects, from pictures on the wall to (if the character is truly desperate) putting two fingers together. If the vampires are adverse to perpendicular lines in general and not crosses specifically, it raises the question of how they survived the invention of architecture.