Literature / More Information Than You Require 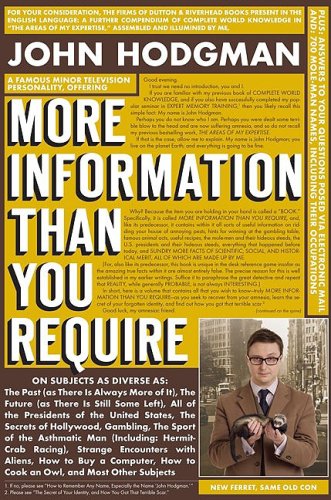 "Every man should be capable of all ideas, and I believe that in the future, he will be."
— The Argentine National Poultry and Rabbit Inspector's Little Book of Shitty Aphorismsnote  WERE YOU EVEN AWARE OF IT? This is an actual quote from "Pierre Menard, Author of the Quixote" by Jorge Luis Borges. It might help to read this book with Google handy.
Advertisement:

Short for:
"For your Consideration, The Firms of Dutton & Riverhead Books of New York City, Publishers of Ken Follett, Darin Strauss, David Rees, and the RZA, Present in the English Language: A Further Compendium of Complete World Knowledge in "The Areas of My Expertise" Assembled and Illumined by Me, John Hodgman, A Famous Minor Television Personality*, Offering More Information Than You Require On subjects as Diverse As: The Past (As There Is Always More of It), The Future (As There is Still Some Left), All of the Presidents of the United States, The Secrets of Hollywood, Gambling, The Sport of the Asthmatic Man (Including Hermit-Crab Racing), Strange Encounters with Aliens, How to Buy a Computer, How to Cook an Owl, And Most Other Subjects, Plus: Answers To Your Questions Posed via Electronic Mail, And: 700 Mole-Man Names, Including Their Occupations.
*Formerly a Former Professional Literary Agent and Professional Writer, AKA "The Deranged Millionaire"
Yes, there is a footnote in the title.

Includes some actually true material dealing with Hodgman's life, including reflections on the considerable success he had achieved since the previous book in the saga was published.

Not to be confused with Too Much Information.

This book provides examples of, and parodies, the following tropes:

Your evil twin is not who you think.