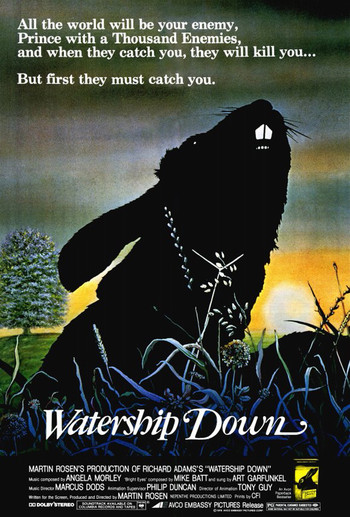 I just wanted a movie about bunnies.

Fiver: There's something very queer about the warren this evening...
Hazel: Is it dangerous?
Fiver: It's not exactly danger, it's... oh, I don't know. Something oppressive... like thunder.
— Opening lines
Advertisement:

A 1978 British animated film directed by Martin Rosen, adapted from the 1972 novel of the same name by Richard Adams.

Hazel (voiced by John Hurt), our protagonist, has a little brother named Fiver (Richard Briers). Fiver has horrific — and, as later events prove, accurate — visions of the destruction of their home warren at Sandleford, but Hazel can't convince their Chief (Ralph Richardson) to pay attention to some loony runt, so he convinces a few of his friends to join him in leaving their homes to escape.

The film is notorious in Internet culture for one simple reason: it's one of the darkest, most graphic pieces of children's fiction ever animated. Certainly, cute and innocent-looking DVD cover art like this

doesn't help, but what gets us here at TV Tropes is that you'd think more people would have heard of the book. Parents of children who are bunny fans may wish to exercise extreme caution, as the film contains an abundance of Nightmare Fuel and unsettling moments. Oh, and it is really bloody, too. It was stamped with a U – suitable for all (basically a G in the US) – by the British Board of Film Classification; this rating has brought them much criticism since.