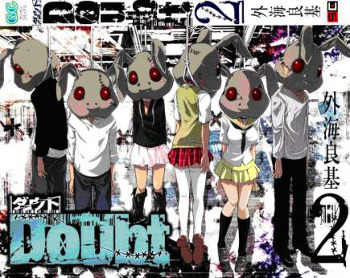 Certainly not Bunnies for Cuteness...
Advertisement:

Doubt is a horror manga written by Tonogai Yoshiki with enough bloodshed and plot twists to make your head spin.

Yuu Aikawa is a typical average teenager who plays a cellphone game called "Rabbit Doubt" with his friends. In this game, the players are a warren of "rabbits" who must figure out which player is the "wolf" hidden amongst them before they are all picked off one-by-one.

Unfortunately, Yuu's normal life is cut short when he is attacked and kidnapped by a strange man wearing a grotesque rabbit mask. He wakes up to find himself trapped with the rest of his friends in an abandoned psychiatric hospital, where they will be forced to play a real-life version of Rabbit Doubt.

Which member of the group is the "wolf" tasked with killing the rest? Who is "Hajime", the stranger who acts as the sixth player of the game? And can the group find a way to trust each other long enough to escape the hospital with their lives intact?

See also Judge, which is either a sequel or a Spiritual Successor, and Secret, the third entry in the series.