Spoilers are unmarked below. 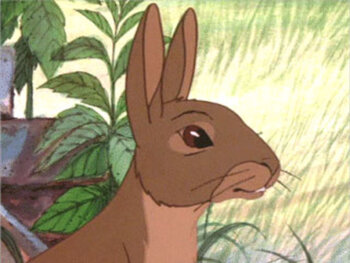 The protagonist, Hazel is the leader of the Sandleford Warren group. 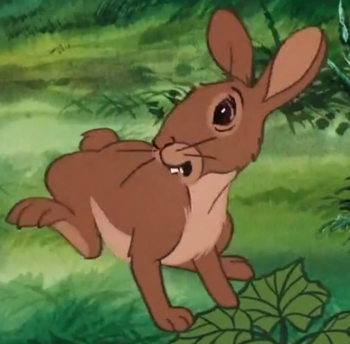 Hazel's brother, a prophet whose visions spur Hazel to leave. 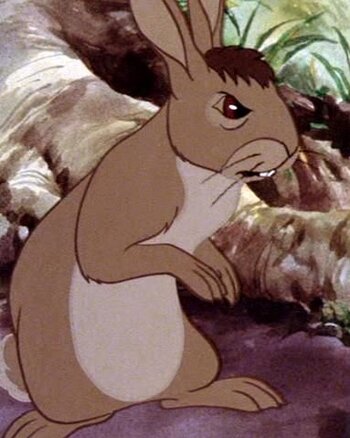 An ex-member of the Sandleford Owsla, Bigwig is the best fighter of the group. 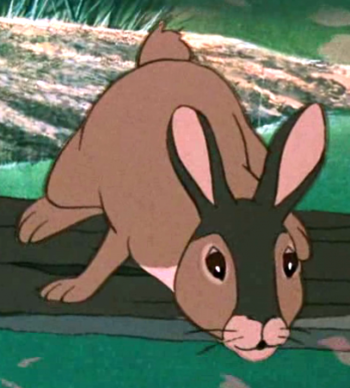 A friend of Hazel, Blackberry is the closest thing the group have to a mechanical genius. 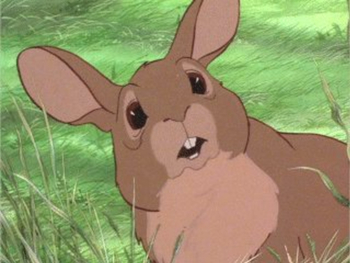 The smallest and most timid of the rabbits, Pipkin is a friend of Fiver who is persuaded to go along on the journey. 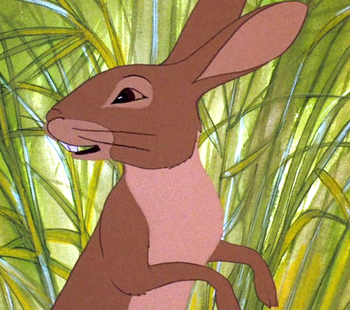 A fast runner and gifted storyteller, whose stories of El-ahrairah keep the spirits up among the rabbits (as well as giving the reader insight in Lapine mythology). 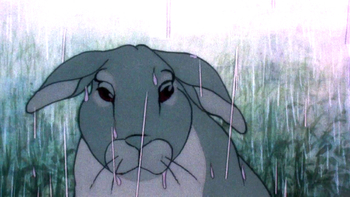 One of Bigwig's friends from the Sandleford Owsla, who is almost as big and good at fighting, but more placid and less hotheaded. He has gray fur, hence the name.

Buckthorn
Described as a "decent, straight-forward fellow", Buckthorn is an outskirter from Sandleford with a tough, sturdy and sensible nature.
Hawkbit 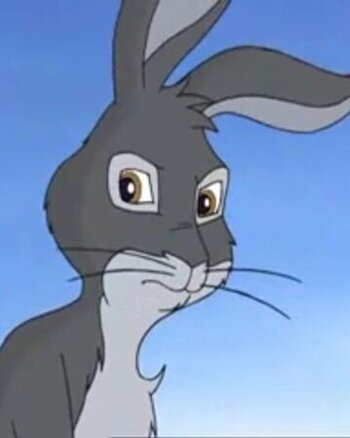 One of the outskirters from Sandleford who joins Hazel's crew. Described (by Hazel) as a rather slow, stupid rabbit, he is the first to complain and express doubt in Hazel's abilities as leader, but soon develops into a loyal follower — after which he's barely even mentioned by the narrative for the rest of the book. In the TV series, he has a dramatically increased role as the resident Eeyore.

Speedwell and Acorn
Two outskirters from Sandleford who join Hazel's crew. Apart from a few scenes and lines here and there, they don't get very much attention in the original novel — though Speedwell got A Day in the Limelight in the sequel, Tales From Watership Down.
Holly 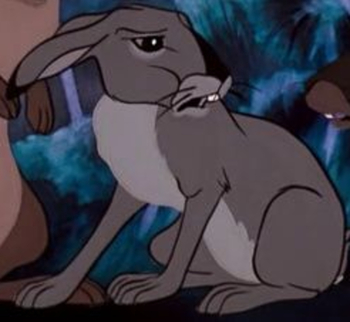 Ex-captain of the Sandleford Owsla, he initially tries to stop the group from leaving but survives the massacre and joins the group. 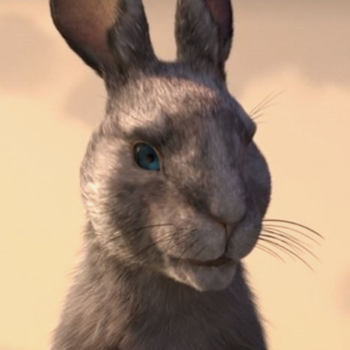 Another ex-member of the Sandleford Owsla, Bluebell survives the Sandleford Massacre and is the only one of Holly's group to make it to Watership Down. 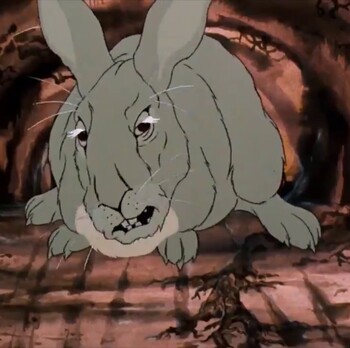 The Chief Rabbit of the Sandleford colony; he dismisses Fiver's visions out of hand in the beginning of the book and pays the price for it. 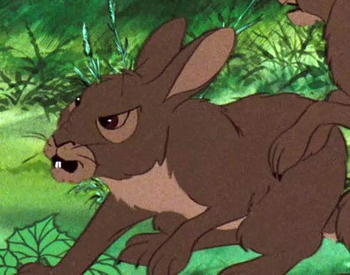 One of the officers of the Sandleford Owsla; he's a jerk and a bully — which unfortunately seems to be rather common for Sandleford Owsla members. He escapes the warren with Holly and Bluebell but his brain has been addled by the humans' poisons and he dies shortly after.

Violet
A doe from Sandleford who accompanies Hazel and Fiver's group in the movie. 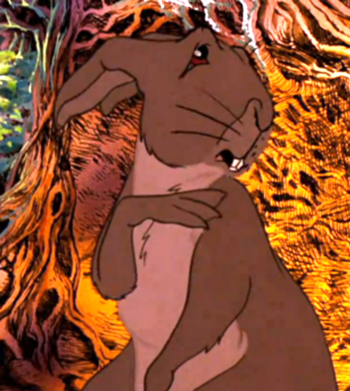 A prominent rabbit in his unnamed warren, Cowslip is the rabbit who takes the group to the warren. 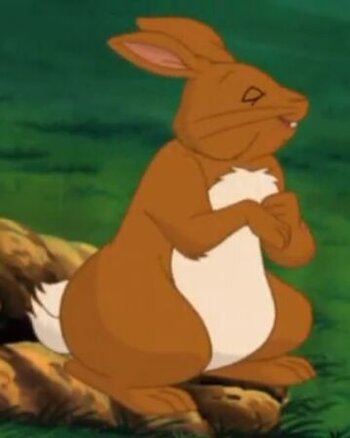 A rabbit who befriends the Sandleford group. He joins them when they depart. 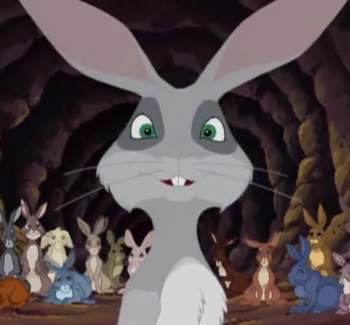 The poet and prophet of Cowslip's warren. 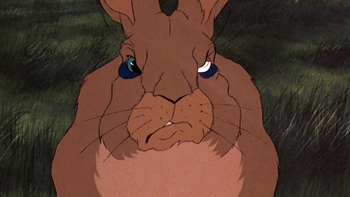 The Big Bad of the novel, General Woundwort leads the Efrafa warren. 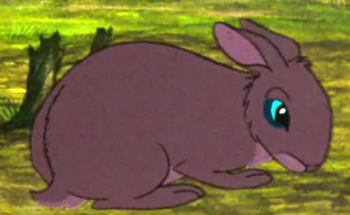 A smart and sensible doe from Efrafa, one of Bigwig's main helpers in the revolt against Woundwort. Like Fiver, she is a prophet who sometimes has visions of the future, though unlike him she isn't always certain she's right. 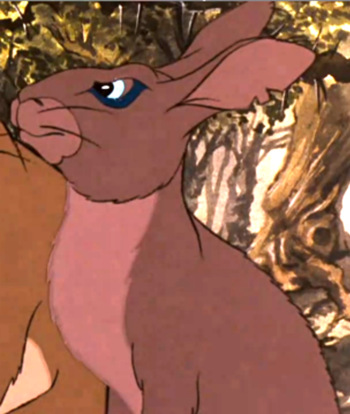 A prominent rabbit in Efrafa, Campion is an enemy of the Watership Down rabbits and an important soldier of Woundwort. 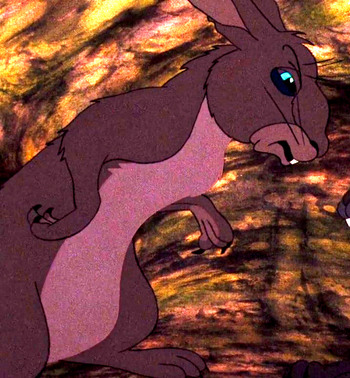 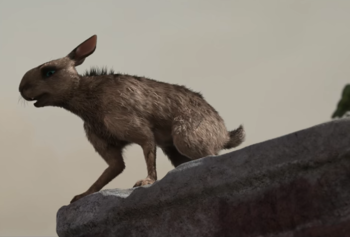 A character created for the Netflix miniseries. As a Captain in the Efrafa Wide Patrol, Orchis initially captures Holly, Bluebell, and Blackberry. He oversees those enslaved and imprisoned by Woundwort's forces, determined to break their will. 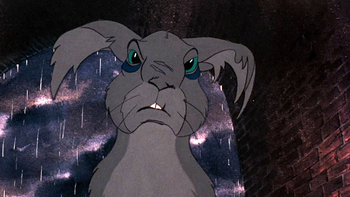 A former member of Efrafa, severely punished for an escape attempt. Bigwig takes pity on him and works Blackavar into his rescue plan.

Groundsel
An Efrafan officer, who despite his obvious hero worship of Woundwort, is a skilled, sensible and decent rabbit. He eventually becomes Chief Rabbit of a third warren, which in Tales from Watership Down gets the name Vleflain.
Thethuthinnang 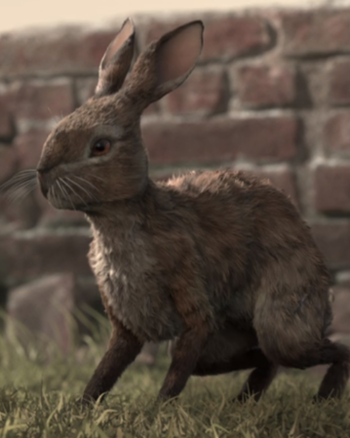 A very young and rather silly Efrafan doe, who basically opposes the authority figures for the thrill of it. Originally lauded by Bigwig for being one of the few non-officer Efrafans who still has a bit of fighting spirit, but proves to be too ditzy and unable to take things seriously to be entirely reliable.

Vilthuril
An Efrafan doe who's a friend of Hyzenthlay and Thethuthinnang, and who becomes Fiver's mate. She's stated to be one of the few rabbits who understand Fiver's burden and is hinted to have visions herself. This hint is more or less confirmed in the sequel, where she has a larger role. 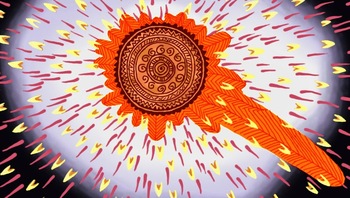 The Sun God and creator of the world. 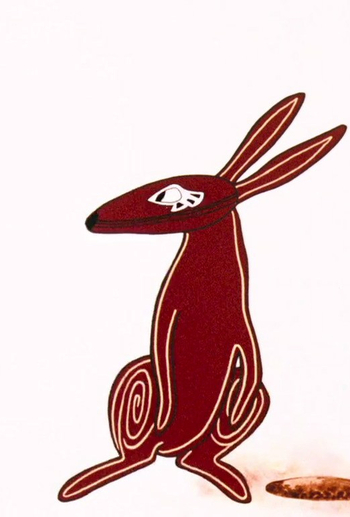 An Anglicized rendering of the rabbit term elil-hrair-rah, "thousand-enemies-prince". The rabbit folk-hero, El-ahrairah is the protagonist of most if not all of their stories. His name itself is one ("Prince with a thousand enemies"), but he also has the honorific "Lord of the Starlit Ears".

Rabscuttle
Captain of El-ahrairah's Owsla, as well as his closest friend and ally.
Prince Rainbow
Frith's deputy and right-hand man on Earth, who has "the power of the sky and the power of the hills." He tries to keep El-ahrairah in check, which lands him the role of antagonist in some stories, but in others he's more friendly and even helps El-ahrairah out with good advice.
The Black Rabbit of Inlé 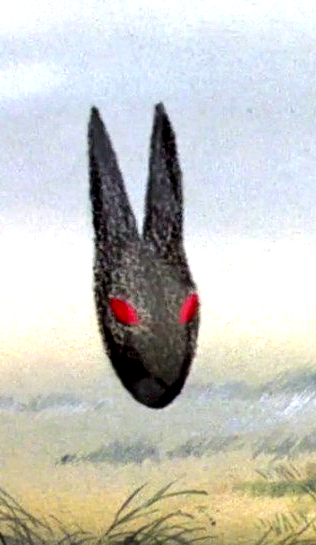 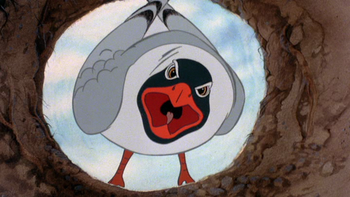 A black-headed gull who is befriended by the Watership Down rabbits, becoming a very important ally. 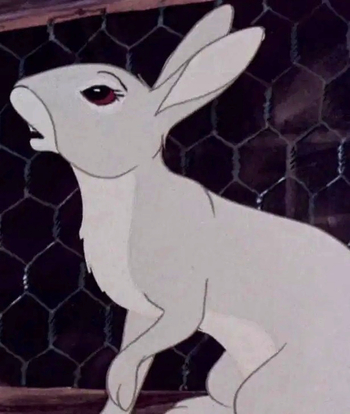 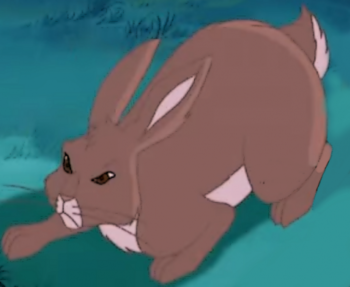 Clover, Boxwood, Laurel and Haystack are four tame rabbits from Nuthanger Farm, who are freed by Hazel and the others to become part of the Watership Down warren. 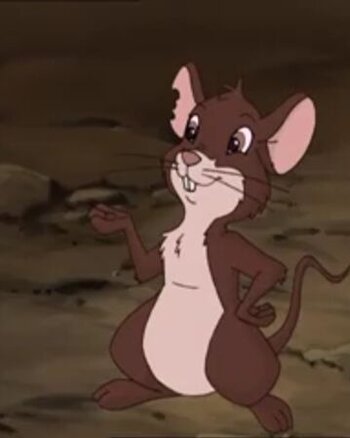 The first non-rabbit animal befriended by Hazel; he is saved from being eaten by a kestrel when Hazel warns him and allows him into the burrow. He later on helps the rabbits out on a couple of occasions, providing what turns out to be vital information.

Flyairth
A doe introduced in Tales from Watership Down; she was originally Chief Rabbit of a doe-dominated warren called Thinial, but was overthrown and expelled from it because her obsessive fear of the White Blindness was consuming her.
Stonecrop
A young but big and strong buck introduced in Tales from Watership Down, who was born in a hutch but escaped to the wild. Having grown up in a sheltered environment, he lacks the other rabbits' survival instincts and fear of predators — which would normally have meant he wouldn't last for long, but, since he smells so strongly of Man, predators don't dare come near him.
Spartina
A tough doe from the warren of Darkhaven.
Granite
An enormous Darkhaven buck.
Shale and Feldspar
Two Darkhaven bucks who serve as Granite's lieutenants.
Bark
Voiced by: Janet Dale
A lonely female badger that befriends Fiver and subsequently becomes an ally to Hazel’s warren.
The Weasel
Voiced by: Matt Wilkinson
A sinister predator that menaces Hazel’s warren during the first season of the tv series.