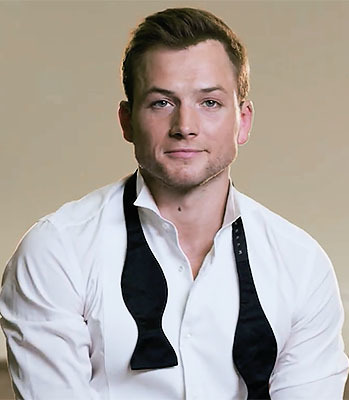 "I don't want to look back at my career and see a string of incredibly commercial projects that don't have much heart. I'm looking for things that have soul."
Advertisement:

He's known primarily for his role as Gary "Eggsy" Unwin in Kingsman: The Secret Service, a live action adaptation of the Mark Millar comic series it shares a name with. He reprised the role in Kingsman: The Golden Circle in 2017.

He's since starred as a love interest in Legend, as the title role in Robin Hood and as Elton John in Rocketman.

Despite the increasing clamour of fans and press, Egerton has kept a strikingly muted presence outside his acting work, by mainstream Hollywood standards.

He's extremely popular in East Asia, especially South Korea. South Koreans have bestowed the Fan Nickname "Kim Taron" upon him; "Kim" being the most common surname in SK, indicating the citizens see him as an honorary Korean. Sometimes written as a fake Romanization of a Korean name, i.e. "Kim Tae Ron."