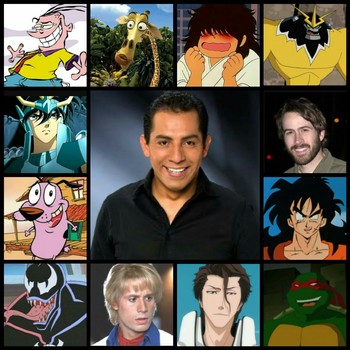 Ricardo Mendoza (in the middle) and some of his roles
"¡Dragón Naciente!"
Advertisement:

Ricardo Mendoza Soberano (born June 25, 1963) is a Mexican voice actor who is most famous as his role as Shiryu from Saint Seiya, Yamcha from Dragon Ball and Seto Kaiba from Yu-Gi-Oh!. He is an expert in playing The Lancer or the Number Two (either Hot-Blooded or Deadpan Snarker subtypes) but he can also make a rather good villain, to the joy and surprise of many.

His wife Rocío González is an actress in her own right, as well as his late younger brother Luis Alfonso Mendoza. His children Monserrat, Itzel and Ricardo Jr. continue on with his legacy as well as his niece Nayeli Mendoza Adame and nephew Gerardo Mendoza. Mendoza is also a stand-up comedian.

He has quite the acting relationship with characters voiced by either Jesús Barrero, José Gilberto Vilchis, René García or Mario Castañeda.