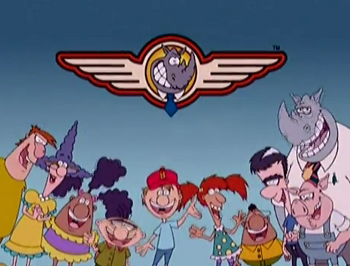 Flying Rhino Junior High is a Canadian animated television series created by American cartoonist Ray Nelson Jr. and produced by Nelvana. It originally aired for 2 seasons and 26 episodes from October 3, 1998 to January 22, 2000 on CBS as part of the Nelvana-produced CBS Kidshow Saturday Morning Cartoon block, but also popped up on Teletoon and YTV in Canada and STV in Scotland, and on the Cartoon Network in the rest of the UK.

In the eponymous school, an evil genius named Earl P. Sidebottom dwells in the depths of its basement, working and living down there a la The Phantom of the Opera after fleeing in shame when he received a "D" grade in shop class. Along with his intelligent rodent servant Raticus, Earl (or "The Phantom" as he prefers to be called) extracts petty revenge on the school pretty much every day by using a highly advanced computer of his design that can warp reality to transform the school into many strange and dangerous places, from a prehistoric dinosaur-filled jungle to Ancient Rome to a Comic Book to a James Bond-esque spy flick, usually basing what he transforms the school into on whatever relevant topic has come up in school on that day.

And whenever Earl is up to no good, it's then up to the school's resident Four Man Band of students, made up of The Leader Billy O' Toole, elementary-aged prodigy Marcus Snarkis, his older sister Ruby Snarkis, and tomboy Lydia Lopez. With a little help from their teachers and fellow students, our unlikely band of heroes are the only ones able to stop The Phantom and his mad machinations, as well as make their way past the crazy and impossible things that happen every day only at Flying Rhino Junior High.

Also, the principal of the school is a talking rhino in a suit, and the janitor is an ex-secret agent Pig Man. There seems to be little reason for this outside of the fact that they just are (well, the principal does have an autobiography called "It's a Skin Condition, REALLY!").

While Flying Rhino Junior High was short-lived, the show's history and legacy is rather interesting. It actually began life as the Flying Rhino series, a collection of humorous kid-oriented educational books originally published in 1993,

as well as a series of short educational cartoons created for schools across America.

And while the show and its predecessors have faded into obscurity following their discontinuation, creator Ray Nelson Jr. continues to use the Flying Rhino characters for educational platforms, from websites and apps to even a grassroots organic food campaign!

Nelvana has every episode available on Youtube through their Keep it Weird channel. You can see them all here!