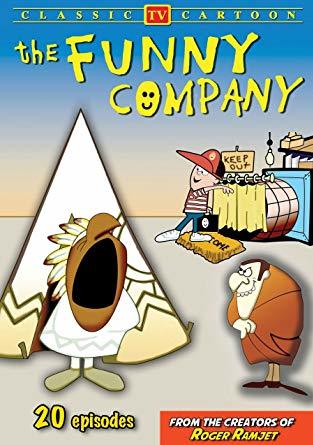 ♫ We have a company, that you can join for free.
That kids in every neighborhood belong.
It's the "Funny Company" cause it's just for fun you see
So come a running when you hear our song
"Come to order, come to order" says the president. And when the Funny Company meets, here's just what we present.
"Things to see!" "And things to do!" "Stories!" "Songs" "Toys!"
And other things of interest! It's fun for girls and boys! ♫
Advertisement:
Super Chief: HOOOONK!
Theme song

The Funny Company, a syndicated cartoon from the Ken Synder studio, was one of two shows debuting in 1963 that was a response to FCC chairman Newton R. Minow's comment that television was a "vast wasteland." It was an "edutainment" show, like the other show debuting the same year, Tennessee Tuxedo and His Tales on CBS.

Buzzer Bell was the president of the Company, which was an offshoot of Junior Achievement. Through each five-minute episode, a live-action film demonstrating scientific feats, how things are made, etc., is featured. The cast includes inventor Jasper National Park, treasurer Merry Twitter, Terry Dactyl (a prehistoric character in modern times — with a baseball cap, yet), the computer Weisenheimer (who narrated the live-action bits), two adult Indians named Broken Feather and Super Chief, and a sweet, introverted little girl named Shrinkin' Violette.

. It has also been seen on TBN's "Smile of a Child" sub channel, and is also available as a Roku channel.