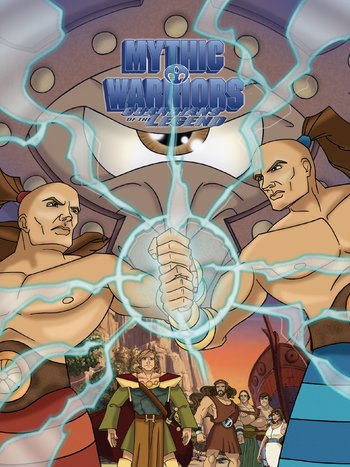 Mythic Warriors: Guardians of the Legend is a Canadian animated series that was broadcast between 1998 and 2000, produced by Nelvana. It was one of several shows co-produced with STV for CBS' Saturday Morning Cartoon lineup in the late 90s. The show ran for 2 seasons and 26 episodes, coming to an end as a result of CBS' decision to abolish all of its children's programming in 2000. The series also aired on STV in the United Kingdom.

The series was based on the book series Myth Men: Guardians of the Legend, written in 1996 and 1997 by Laura Geringer and illustrated by Peter Bollinger. It's notable for its Truer to the Text portrayal of Classical Mythology, as well as having the voice cast from X-Men: The Animated Series. It's also considered to be one of Nelvana's all-time best series, for its excellent retellings of Greek mythology, competing alongside the likes of their Animated Adaptations of Franklin, Babar, and Redwall, as well as Detentionaire and Mysticons.

The series can be viewed in its entirety on YouTube at Nelvana's Retro Rerun channel. Check them out here

Pandora is tempted by the box that she's forbidden to open

Pandora is tempted by the box that she's forbidden to open