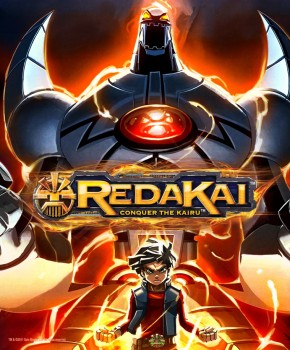 Redakai: Conquer The Kairu is a Merchandise-Driven cartoon series and card game developed by SpinMaster. The game centers around cards (Called "X-Drives") that are made of clear plastic and have several transparent portions. There are three types of cards: Characters, who you start with three of, Monsters, which change the defenses and abilities of characters, and attacks, which damage opponents. First player to knock out all three of their opponents wins.

The Cartoon centers around a boy named Ky Stax and his friends Boomer and Maya who quest around the world trying to collect an energy called "Kairu", the life energy of the universe before the villain Lokar and his minions find it first. They do this by fighting other teams and transforming into monsters. The episodes are different every week without much of an overarching plot.

Redakai came in with a lot of fanfare but fell by the wayside in the United States on Cartoon Network after just a few months due to overwhelmingly negative reception.

There is in fact a Season 2 subtitled "Shadow of Lokar" that was in production and has been completed for some time now. Season 2 episodes have begun airing October 3, 2012...in France... However, some countries, like Australia, have aired the English episodes (with the US having no sign of airing them at all), and they can be found on Amazon Prime Video.