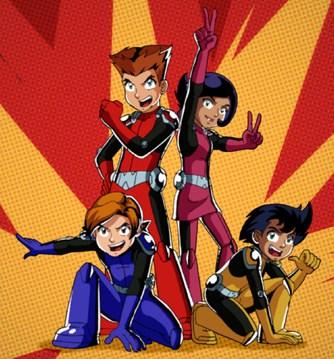 Another offering from Marathon Media, the studio behind Totally Spies! and Martin Mystery, originally created for Disney Channel Asia, later imported into Cartoon Network. The series, a sort of Spiritual Successor to Totally Spies featuring much younger protagonists, is about the adventures of four young siblings (Tony, Marc, Megan, and Lee Clark) who must balance their lives in middle school with their secret lives as spies working for WOOHP, the World Organization of Human Protection. Though Jerry appears once more as a coordinator and parent figure for the young heroes, Sam, Alex, and Clover are relegated to simple cameos.

Definitely not related to the little Swiss city.