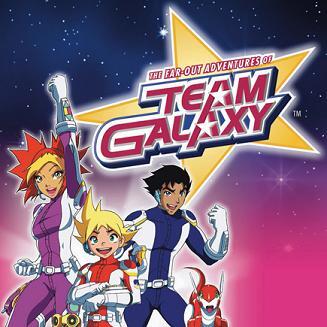 Team Galaxy is a French and Canadian 2006 animated series that aired on YTV for 52 episodes in 2 seasons. The story is about three young students living their own normal lives and training to become space marshals. The protagonists are Yoko, a wannabe pop singer, Brett, a serious Child Prodigy, and Josh, a rebellious and fun-loving adrenaline junkie. They attend Galaxy High (not to be confused with Galaxy High, a 1980s animated program)

It's made by the same company as Martin Mystery and Totally Spies!, which explains the Animesque style.

Not to be confused with Team Galactic.