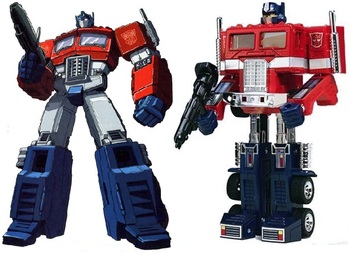 Megatron must be stopped, no matter the cost!
"How can Transformers possibly 'sell out'? It started as a twenty-minute toy commercial."
— Ethan, Shortpacked!
Advertisement:

The Merchandise-Driven show, otherwise known as the "half-hour toy commercial", is not merely a television show (or other work) with a line of toys licensed on the side, but a television show created from a line of toys. The program exists largely to sell these products to the audience. Although merchandise-driven cartoons and anime are usually targeted at younger viewers, examples aimed at the older demographic do exist, though they're fairly rare.

. The FCC classified 1969's Hot Wheels cartoon as "a thirty-minute toy commercial", which pretty well killed the show (along with reruns of Linus the Lionhearted, a show starring the cartoon Mascots of the Post Cereal line).

(Conversely, it was rare that a popular show would spawn action figures and toys when it was actually on the air in the US. Throughout The '60s and The '70s, the only reliable source for the various Cool Cars and Cool Ships from various science fiction and superhero shows were the Corgi line, imported from the UK. Mego's Star Trek: The Original Series figures didn't appear until well after the show was in reruns.)

Today, there is a full symbiotic relationship between the show's production and the toy company (or other manufacturer licensed, show-themed products), which is usually the primary (or even only) sponsor of the show. But the key difference between this and normal licensed merchandising is that here, it is the toy manufacturer who dictates the show's canon. They may be able to demand addition or removal of characters from the series based on the actual toys in their production line, or that new characters must be something that they can design a toy version for on demand (military or paramilitary-themed shows and Humongous Mecha anime are particularly prone to this). Another sign of a toy manufacturer exerting influence is the blatant structuring of episode plots solely around the newest merchandisable toy accessories, often where the characters Gotta Catch 'Em All or be declared a failure as a human being ... yeah, something like that. Meanwhile, in Tokusatsu works, it has become common for the production staff to use weapons and Transformation Trinkets from the show's toyline in the actual show itself.

Merchandise Driven shows are not limited to a young audience either. Many works are adapted from manga, video games, toys, etc. only if there's an existing lucrative market, and older fans are often targeted for their potential loyalty and deeper wallets. That so many comic books and late-night anime can maintain a decent budget is due to this small but vocal group of fans.

Can be halfheartedly avoided with the use of a Segregated Commercial. Still, this sometimes produces a Franchise Zombie. However, Tropes Are Not Bad — some fandoms like the merchandise more so than the show itself.

Many musicals ensured that potential hit tunes were reprised a few times. This was as much for the sake of the song publishers as for dramatic opportunities like the Dark Reprise. The revues, which were formed around Sketch Comedy and had little to no plot, could get quite shameless: some of them explicitly introduced song reprises as a ploy to sell sheet music.

Note that a show can have a line of licensed merchandise without being Merchandise Driven, and once the requirements are met the writers are basically given free rein to script what they want. See The Merch for that. Peanuts creator Charles Schulz was famously quoted as saying there is nothing wrong with using characters in marketing, so long as the quality of one's work stays refined. That said, Bill Watterson has, equally famously, taken no chances and limited Calvin and Hobbes to the print medium to prevent any decay in quality. (Unfortunately, this caused people to just make offensive unauthorized merchandise...)

Also note while advertising can often be the main reason for a show's existence, it is never the only reason, that's what actual commercials are for. Shows of this nature always do their best to tell a story and to keep the viewers hooked with said story. Keep that in mind whenever viewing a show that falls under this trope.

It's also notable that, when the series is particularly well-done, it may outlive the product that inspired it. This seems to be particularly true of comic books, such as ROM: Space Knight and Micronauts. It's also common for merchandise driven shows to develop a cult following that long outlasts the original merchandise; such a fanbase may result in its eventually being Un-Canceled (usually with accompanying new merchandise), as the current incarnations of Transformers, G.I. Joe, and others can attest.

Compare Misaimed Marketing, where this sort of thinking is applied where it shouldn't be. See also Defictionalization, where the licensed merchandise is also merchandise inside the show; and Breakaway Advertisement. In some instances, this can also be intertwined with Off-the-Shelf FX. Contrast with The Merch, where the merchandise sales came after the work, in order to support it. For derivative works that are (usually) not metatextual focus of the original work, see Tie-In Novel, Licensed Game, and Advertisement Game.

See also Product-Promotion Parade, a common occurrence in Merchandise Driven works, and Cash Cow Franchise, and Toyline-Exclusive Character, where the merchandise includes characters that don't actually appear in the work made to promote the merchandise. See the Analysis page for a list of tropes enforced in these works as ways to sell more merchandise.

Buy all our playsets and toooooooooys!

"Techno Power Teenage Warriors" spoofs Merchandise-Driven shows like Power Rangers. The segment keeps getting interrupted for commercials about the toyline featured in the show.

"Techno Power Teenage Warriors" spoofs Merchandise-Driven shows like Power Rangers. The segment keeps getting interrupted for commercials about the toyline featured in the show.