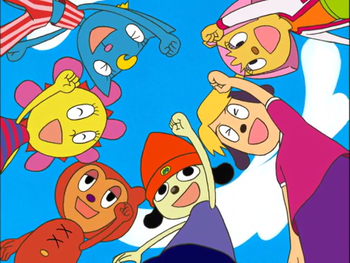 PaRappa the Rapper is a 2001-2002 anime based off the PlayStation game of the same name; it was meant as a tie-in for the second game in the series. The anime ran for a total of 30 episodes (with the final 2 episodes being combined into a 1-hour special).

The anime is a Slice of Life work that expands upon the games and features several original characters. It, however, de-emphasises the rapping; PaRappa only raps once in the entire series.