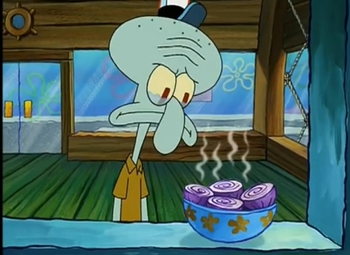 "Hey, who left this bowl of onions here?"
"A hard man is he who an onion shreds, yet not a teardrop sheds."
— The Seasonings by P.D.Q. Bach
Advertisement:

Just like how pepper can make you sneeze, onions in fiction can produce oceans of tears, giving the appearance that you have experienced a horrendous tragedy, instead of the mild eye irritation that occurs in boring Real Life. Oftentimes, onions will make the characters sob uncontrollably, rather than just leak a few tears from the eyes.

In Real Life, if the onions are green or very fresh, especially if cut very close to the root end, they can produce the copious tears, often accompanied by sniffing (because your tear ducts and nasal tubes are connected), but not the sobbing (although sometimes, the tears and sniffling can make you congested, forcing you to breathe through your mouth and send you even one step closer to the appearance of sobbing.)

This has several useful applications for those with something to hide: either you can disguise your real tears of pain by grabbing some onions to peel (compare Sand In My Eyes), or you can use onions to get tears in your eyes and simulate real pain when you don't feel it.

Vaguely related is the situation in anime where a character simulates crying while not-very-subtly holding an eyedropper bottle. Apparently only the audience can see it, though.