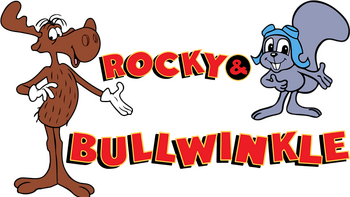 "A thunder of jets and an open sky,
A streak of gray and a cheerful "Hi!"
A loop, a whirl, a vertical climb
And once again you know it's time
For the adventures of Rocky and Bullwinkle and Friends!"
— The altered Season 2 opening narration of Rocky and His Friends
Advertisement:

This cult cartoon series, produced by Jay Ward and Bill Scott, first ran as Rocky and His Friends on ABC Thursday evenings from 1959 to 1961. It featured the serialized adventures of Rocky (voiced by June Foray), a flying squirrel who wore flight goggles, and Bullwinkle (Bill Scott), a dimwitted moose. Their primary foes were Boris Badenov (Paul Frees) and Natasha Fatale (Foray again), a pair of Slavic spies from the imaginary Soviet satellite of Pottsylvania. In 1961, the series moved to NBC and became The Bullwinkle Show; it ran in prime time under that title until 1963 then moved to Saturday morning. It moved to ABC Sunday mornings a year later and ran till 1973. It re-appeared on NBC Saturday afternoons in 1981 and in prime time on CBS in 1990 for a two-week run ("The Last Angry Moose" arc). Both series have since been seen in syndication and on cable TV with the title changed to The Adventures of Rocky and Bullwinkle and Friends.

Bullwinkle also appeared in two other segments: Bullwinkle's Corner, in which he gave poetry readings that usually degenerated into chaos, and Mr. Know-It-All, in which his attempts to offer "how-to" advice on a variety of topics often met with similar disaster. Supporting segments were Dudley Do-Right of the Mounties, Peabody's Improbable History, Fractured Fairy Tales and Aesop and Son. William Conrad served as the Narrator for the main Rocky and Bullwinkle segments, while Paul Frees and Edward Everett Horton performed that function in Dudley Do-Right and Fractured Fairy Tales respectively.

It continued with Rocky and Bullwinkle comics through the 1980s. In 2000, Universal released The Adventures of Rocky & Bullwinkle, The Film of the Series produced in live action, apart from a CGI moose and squirrel voiced by Keith Scott and June Foray, and hand-drawn opening and ending sequences mimicking the style of the 1950s cartoon. Jason Alexander and Rene Russo played Boris and Natasha. Robert De Niro, a fan of the show from his youth, not only played Fearless Leader, but was also one of the film's producers.

In the summer of 1986, selected cities had An Evening With Rocky and Bullwinkle, a theatrical screening of Jay Ward features which included R&B, George of the Jungle, Hoppity Hooper, and Ward's first creation, Crusader Rabbit. In 1992, there was a made-for-cable movie, Boris and Natasha, about the bad guy couple. Rocky and Bullwinkle were human in this film ("Agents Moose and Squirrel, genetically altered once again"), with a post-Cold War theme. Sally Kellerman, like DeNiro in the later film, was a fan of the show and co-produced it, playing Natasha. A feature film adaptation and Continuity Reboot of Peabody's Improbable History as Mr. Peabody & Sherman, produced by DreamWorks Animation, who acquired Jay Ward's library via its Classics subsidiary, was released on March 7, 2014, which then spunoff into a TV series, The Mr. Peabody & Sherman Show, on October 9, 2015. Asides that, The Adventures of Rocky & Bullwinkle, a Continuity Reboot starring the titular squirrel-moose duo would follow in May 2018 as an Amazon Prime original (and was the first time DreamWorks created a streaming series not on Netflix).

A "making of" special, called Of Moose and Men: The Rocky and Bullwinkle Story, was aired in 1991 on PBS.

"And now here's something we hope you'll really like!":

The trope page is getting longer and longer!
Bullwinkle: It's longer than my auntie's socks
But how much longer can it get?
Rocky: Longer than the average person spends on here, I bet.
Be with us next time for "On The Tropes" or "This Is Your Ruined Life"!

Rocky and Bullwinkle discover a miniature jewel-encrusted dhow with the words "Omar Khayyam" on it. Upon finding out that the gems on the yacht are rubies, only one is brave enough to perform the unenviable task of making the pun.

Rocky and Bullwinkle discover a miniature jewel-encrusted dhow with the words "Omar Khayyam" on it. Upon finding out that the gems on the yacht are rubies, only one is brave enough to perform the unenviable task of making the pun.